The Impact of Holy Quran on Life 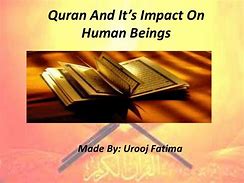 The impact of the Holy Quran on mankind is immeasurable. As it provides complete guidance on what is right and what is wrong in all aspects of life. This topic is as vast as the Quran that doesn’t leave behind any aspect of life in this great universe and hereafter. There are many wonderful and divine impacts of the Holy Quran on the life of human beings. Indeed Allah has bestowed the Quran for no other reason but to guide mankind to get success.

What Is the Holy Qur'an?

The Qur'an is the last of the books revealed by Allah for the guidance of human beings in this world, but in terms of its influence, it is at the forefront. The books that human beings have written cannot be counted. The influence of some of these books, no doubt, was accepted by the world, but it has nothing to do with the Qur'an. Every such human writing has left its mark in a limited sphere, but the Qur'an has changed the world. It gave the world new people, a new society and a new way of governing. Changing someone is the hardest thing in the world. The Qur'an addressed the individual and turned not only his mind and character but also his emotions and feelings. He envisioned a pure society on the basis of purity of thought and vision and morals and character, and established such a society. He said the state should be based on freedom of thought and action, justice and equality and it was its duty to respect human rights. The world experienced this state through it. The world is a hotbed of change. There are always small and big changes, but through the Qur'an, he witnessed a comprehensive change. This change became a pattern forever. Whenever man has a broad conception of goodness and welfare, this pattern will be in front of him.

Impact Of Quran on Life

Quran has great Impact on Marriage to live a perfect life in perspective of Islam. The family is the fundamental part of a society. It comprised the permanent relation established between them. Allah says in the Holy Quran: "Men are the supporters of women," Allah states in the Holy Quran, "because Allah has sowed more blessings on the one than on the other, and for what they have to give (for them) from their means." As a result, honest women are obedient and safeguard what God has commanded them to protect in the absence of their husbands. (Quran 4:34)

The Quran's Impact on Education also has great significance in life. As ALLAH Almighty very firstly taught his beloved Prophet Muhammad (PBUH). “Read! In the Name of thy Lord, Who created, (all that exists), created man from a clot (a piece of thick coagulated blood). Read! And your Lord is the Most bountiful, who taught (the writing) by the pen [the first person to write was Prophet Idrees (Enoch)]. Taught a man that he knew not.” “[96:1-5(the first verses) Quran]”. Allah Almighty ordered his men to study and seek knowledge. There are also many other orders in the Quran about getting knowledge and conducting research.

Quran has left many other lasting impressions on our everyday life and in order to become the people of productivity and people of integrity, we should live our lives on the principles of Islam, revealed on our beloved Prophet Muhammad (PBUH) 1400 years before.

What exactly is Hajj?